One Year Anniversary of the Passing of FW de Klerk

Today we mark the first Anniversary of the sad passing of GLF’s Founding Father, former President and Nobel Laureate FW de Klerk.  He dedicated his life to making a difference, not only in his own Country, for which he is justly recognised as a figure of historic stature, but also to the lives of people around the world by sharing his experience to assist those national leaders in office today.  He was an inspiration to all the GLF family to follow his example and commit themselves to use their experience to help others. 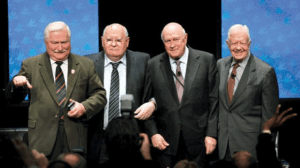