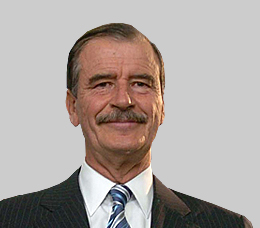 Fox’s priorities as President were improving the Mexican economy, mainly through better trade relations with the United States, banking reforms and tackling crime and corruption; increased bilateral cooperation with the United States on drug trafficking and illegal immigration; and strengthening the rights of Mexico’s indigenous peoples.

Vicente Fox began his career in business. Having earned a degree in business administration from the Ibero-American University in Mexico City and from the Harvard Business School, Fox worked for the Mexican unit of the Coca-Cola Company, serving as the company’s CEO in Mexico from 1975-79. Convinced that Mexico needed new leadership as the country’s economy struggled in the 1980’s, Fox turned to politics and joined the National Action Party (PAN) in 1987.

In 1988 Fox was elected to the national Chamber of Deputies, representing the Third Federal District in León, Guanajuato and, in 1995, became the governor of Guanajuato, in which role he promoted government efficiency and transparency. He was one of the first state governors of Mexico to give a clear, public and timely account of the finances of Guanajuato, and he pushed for the consolidation of small firms, promoted the sale of goods manufactured in Guanajuato overseas and created a unique system in which micro-credits with no overdue portfolio were granted. Under Fox, the state became the fifth most important Mexican state economy.

In 2000 Fox ran for president on a platform that focused on ending government corruption and improving the economy. At the polls he easily defeated PRI candidate Francisco Labastida Ochoa, and on Dec. 1, 2000, he succeeded Ernesto Zedillo as president of Mexico. It was the first time in Mexico’s history that an incumbent government peacefully surrendered power to an elected member of the opposition.

Fox focused his early efforts on improving trade relations with the United States, calming civil unrest in such areas as Chiapas, and reducing corruption, crime, and drug trafficking. In 2001 his administration introduced constitutional reforms that strengthened the rights of Mexico’s indigenous peoples. Although the measures were ratified by the necessary number of Mexican states, seven other states—including Chiapas, where more than half the indigenous population lives—rejected them. Advocates for indigenous rights objected to amendments that required indigenous peoples to act in accordance with the constitution and that reduced their autonomy in some spheres. Leaders of the Zapatista National Liberation Army in Chiapas—who had made constitutional reform a condition of their return to peace talks—also opposed the new law.

In economic affairs, Fox’s proposals, particularly his plans to increase taxes as part of sweeping reforms to stabilize the Mexican economy and banking system, met fierce resistance in the Mexican legislature, where the PAN lacked a majority.

In 2006 Fox left office, succeeded by Felipe Calderón of the PAN.

Since leaving the presidency, Vicente Fox has been involved in public speaking across the world.

Mr. Fox is the Founder of Centro Fox, a nonprofit foundation dedicated to serving communities in Mexico and Latin America. Centro Fox seeks to reduce corruption, increase transparency, improve immigration policy and encourage a sense of commitment and solidarity among the Mexican population for the underprivileged and for those who have not enjoyed the benefits of development. Among its many programs, Centro Fox supports the development of leaders dedicated to serving their communities in Mexico and Latin America.

Vicente Fox became a Member of the Global Leadership Foundation in 2012.