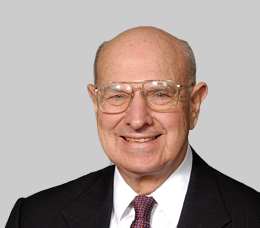 “GLF provides quiet, experienced and confidential advice and counsel to leaders around the world with a recognised need for such help. Disinterested support is a rare and precious commodity and GLF is unique in making it available”.

Thomas Pickering served in the U.S. Navy from 1956-1959, and later in the Naval Reserve to the grade of Lieutenant Commander. Between 1959 and 1961, he was assigned to the Bureau of Intelligence and Research of the State Department and later to the Arms Control and Disarmament Agency. From 1962 to 1964 Thomas Pickering worked in Geneva as political adviser to the U.S. Delegation to the 18-Nation Disarmament Conference.

From 1989 to 1992 Thomas Pickering was U.S. Ambassador and Representative to the United Nations in New York, where he played a critical role in shaping the UN Security Council’s response to Iraq’s invasion of Kuwait.

In 1996, Thomas Pickering was awarded the Department of State’s highest award – the Distinguished Service Award – and he holds the personal rank of Career Ambassador, the highest in the U.S. Foreign Service.

After being briefly President of the Eurasia Foundation, a Washington-based organization that makes small grants and loans in the states of the former Soviet Union, Thomas Pickering joined The Boeing Company in 2001 where he was for five and a half years Senior Vice President International Relations. He was also a member of the Executive Council of The Boeing Company. At Boeing he was responsible for the company’s relations with foreign governments and the company’s globalization. Since December 2006, Thomas Pickering has been Vice Chairman at Hills and Co which provides advice and counsel to a number of major U.S. enterprises.

Together with fellow GLF Member, Lakhdar Brahimi, Thomas Pickering co-chaired an international task force on Afghanistan, organised by the Century Foundation. Their findings and recommendations sought to determine what kind of political path might lead to ending the war. (This report can be viewed at http://tcf.org/publications/2011/3/afghanistan-negotiating-peace)