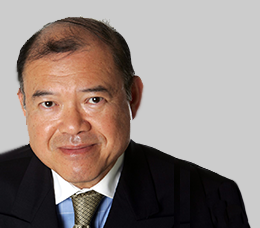 Born in Bangkok on 30 May 1946, Dr.Supachai went on the scholarship of the Bank of Thailand to study at the Netherlands School of Economics (renamed Erasmus University) in Rotterdam, the Netherlands in 1963. In 1973, he completed his doctoral dissertation under supervision of Professor Jan Tinbergen — the first Nobel laureate in economics. His dissertation was published later by Rotterdam University Press under the title “Educational Growth in Developing Countries”. It was widely used by universities in Europe as an early research work in linking human resource factor to sustainable development.

Dr.Supachai spent one year at the Department of Applied Economics, Cambridge University as a visiting fellow working on a theoretical model of Keynesian multiplier concept. In 1974, he began his professional career at the Bank of Thailand, resigning from the bank in 1986 to take part in the national election campaign. On being elected a member of the Thai parliament, he was appointed Deputy Minister of Finance. Dr.Supachai was twice more elected as an MP and once appointed as a senator. In his political career, he was twice appointed as Deputy Prime Minister and once as Minister of Commerce. On leaving Commerce Ministry in 2001, Dr.Supachai published a book titled “Globalisation and Trade in the New Millennium”.

In his private sector career, Dr.Supachai had served for a number of years as the head of a major commercial bank. During the Asian Financial crisis (1997-98), he led Thailand economic team that guided the country out of a severe economic malaise.

After having being part of the Asian wide endeavour in shaping various regional integration efforts, Dr.Supachai was elected to serve as Director General (2002-2005) of the World Trade Organisation as the first representatives of the developing countries to have been conferred with this honour. Before he left for WTO, together with co-author Mark Clifford, he published: “China and WTO : Changing China Changing WTO”. As Director General, he strengthened the development

perspective of the WTO, launching the research-based World Trade Report, achieving the landmark agreement on TRIPs and Public Health, securing stronger coherence with Bretton Woods Institutions, and providing ground work for the launch of the Aid for Trade initiative.

As Secretary General of UNCTAD (2005-2013), Dr.Supachai undertook many reforms to enhance the coordination and impact of the organisation, strengthen research and analytical work, streamline reports to make them relevant to policy-makers, and set up the UN Inter-agency Cluster on Trade and Productive Capacity involving 15 UN agencies. He ensured that UNCTAD’s voice, calling for a globalisation based on sustainable and inclusive development rather than on finance, was heard.