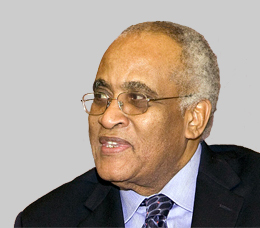 Dr Salim started his diplomatic career at the age of 22, when serving as Ambassador of Zanzibar to Egypt, which made him the youngest African ambassador at the time. Barely four months into his post, Dr Salim became the First Ambassador of the United Republic of Tanzania and Zanzibar to Egypt. He then became High Commissioner of Tanzania to India (1965-1968), Ambassador to the People’s Republic of China (1969) and Permanent Representative to the United Nations in New York (1970). Whilst serving at the UN he was also accredited as Tanzania’s Ambassador to Cuba and High Commissioner to Guyana, Barbados, Jamaica and Trinidad and Tobago (1970-1980).

After leaving the UN in 1980, Dr Salim returned to Tanzania and was appointed Minister of Foreign Affairs (1980-1984). In April 1984 he was appointed Prime Minister, a position he held until November 1985. He then served as Deputy Prime Minister and Minister of Defence and National Service up until his election as Secretary-General of the Organization of African Unity (OAU) in 1989.

Dr Salim’s tenure at the OAU was for a record three terms, up until 2001, during which time as Africa’s most senior diplomat he displayed a high degree of skill and diplomacy in addressing Africa’s problems, and oversaw the OAU’s transformation into the Africa Union.

Dr Salim was also the co-chair of the Eminent Persons Group on Small Arms and Light Weapons and a member of the Eminent Experts Group appointed by the UN Secretary General following the Durban World Conference against Racism, Racial Discrimination, Xenophobia and related Intolerance. He also served as a member of the Foundation Council, Centre of Humanitarian Dialogue, the Policy Advisory Commission of the World Intellectual Property Organization and as African Water Ambassador, with responsibility for advocacy, sensitisation and mobilisation of support.

Dr Salim has been a Member of the Global Leadership Foundation since 2011.