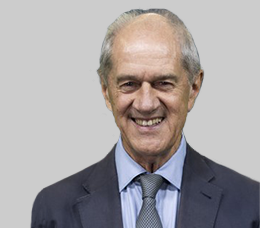 Roelf Meyer became a Member of Parliament in 1979. He first served as Deputy Minister of Law and Order and then as Deputy Minster of Constitutional Development until 1991.

In 1992, Meyer was appointed as Minister of Defence by FW de Klerk, then State President. After nine months in office, Meyer resigned and became Minister of Constitutional Affairs and Communication in the de Klerk government, and it was in this position that he entered the negotiating process. Together with Cyril Ramaphosa, Chief Negotiator for the African National Congress (ANC), Meyer negotiated the end of apartheid and helped pave the way to the first democratic elections in South Africa in 1994. Meyer subsequently served as Minister of Constitutional Development in Nelson Mandela’s cabinet. He resigned from active politics in 2000.

After leaving politics, Roelf Meyer held the Tip O’Neill Chair in Peace Studies at the University of Ulster. Meyer was subsequently appointed Chair of the South African Defence Review Committee (2011-2014).

He was awarded the Order of the Baobab in Silver by President Motlanthe for his immense contribution in providing special support in the birth of the new democratic South Africa”.