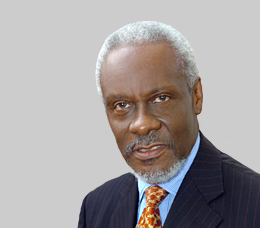 “GLF brings together a pool of vast experience, acquired from diverse backgrounds, which can enable it to make a unique contribution in building one world where peace, freedom and social justice prevail.”

PJ Patterson’s interest in politics and international relations began as a student, when he served as Chairman of the University of the West Indies External Affairs Commission, during which period he gained exposure to world leaders and international political thought through attendance at a number of international student fora. It was also at university that he developed a commitment to Caribbean regionalism as well as to the causes of the countries of the developing world.

In 1969 PJ Patterson managed Michael Manley’s campaign to become President of the People’s National Party, and he was later appointed Campaign Manager for the party’s successful bid for power in the 1972 General Elections. PJ Patterson was appointed to the Jamaican Cabinet where he held diverse portfolio responsibilities for areas as varied as trade and industry, tourism, foreign affairs, finance and planning. During his tenure as Jamaica’s Foreign Minister he served as President of the ACP/EU Ministerial Council and led negotiations for the African, Caribbean and Pacific Group of States with the European Community.

As Chairman of the ACP/EEC Ministerial Conference, he played a pivotal role in forging an agreement on the basic framework for the original Lomé Convention, which influenced the outcome of subsequent negotiations that led to the Convention being signed in 1975. He has served as President and Spokesman of the ACP Ministerial Council on a number of occasions.

PJ Patterson became Prime Minister of Jamaica in 1992 following Michael Manley’s resignation. This was a period when the Caribbean island nation was facing the formidable challenge of securing a place in a new global order of economic liberalization and deregulation, and PJ Patterson led efforts to strengthen the country’s social protection and security systems—a critical element of his economic and social policy agenda to mitigate, reduce poverty and social deprivation.

His significant investments in modernization of Jamaica’s infrastructure and restructuring of the country’s financial sector are widely credited with having led to Jamaica’s greatest period of investment in tourism, mining, information and communication technologies and energy since the 1960s. He also ended Jamaica’s 18-year borrowing relationship with the International Monetary Fund, allowing the country greater latitude in pursuit of its economic policies.

His policy of liberalization attracted over $4.7 billion in foreign direct investment to the country and resulted in the expansion of the private sector into several areas of economic activities, leading to greater access to goods and services at competitive prices. The liberalization of the information, communication and telecommunications sector also positioned Jamaica as a gateway country in the Caribbean that possesses the infrastructure to transact business and facilitate economic activities in timeframes comparable to the developed world.

In one of his final initiatives as Prime Minister, PJ Patterson launched a program of radical transformation of the island’s education system aimed at the development of quality human capital equipped to succeed in the competitive global economy. As a result of his deliberate pro-poor policy, Jamaica surpassed the Millennium Development Goal of halving poverty, which declined by 70% between 1991 and 2006.

PJ Patterson played a seminal role in the process that marked the transition from the first steps in integration of the Caribbean region to the founding of the Caribbean Free Trade Association (CARIFTA) and its evolution into the Caribbean Community (CARICOM). He drew upon his expertise in law and trade to steer the regional body toward the development of a Caribbean jurisprudence through the Caribbean Court of Justice, and a borderless regional economy through the CARICOM Single Market, which came to fruition in 2005 and 2006 respectively. As Chair of the CARICOM Prime Ministerial Sub-Committee on External Negotiations since its inception he is credited with developing a unified negotiating position of CARICOM countries in the international arena. He also contributed to numerous Conventions and Statements in the international arena including the Valletta Statement on Multilateral Trade and the Gozo Statement on Vulnerable Small States. These have helped to shape north-south relationship and influence the negotiating position of developing countries.

PJ Patterson was also chair of the UN Security Council during his tenure as Prime Minister (in 2000-01).

PJ Patterson has extensive experience and acknowledged expertise in national, regional and international policy and political issues in a broad range of areas including international trade and negotiations, which he has garnered in his more than three decades in government. He has also played an integral role in settling cross border conflicts between CARICOM countries. He has served as Chair of the Group of 15 developing nations (G-15), Group of 77 and CARICOM and between 2006 and 2007 PJ Patterson chaired the Committee on Commonwealth Membership, which presented its report on potential changes in membership criteria for the Commonwealth of Nations at the Commonwealth Heads of Government Meeting 2007 in Kampala, Uganda. He chaired The Ramphal Committee on Migration and Development in the Commonwealth. He was appointed to the Board of Trustees of the African Union Foundation and received the Order of the Companions of O.R. Tambo: Gold for his contribution to the Liberation struggle. He is Chairman of the Caribbean Tournament Committee of the Caribbean Premier League (T/20 Cricket).

In March 2010 PJ Patterson commenced duties as CARICOM’s Special Representative to Haiti, following the catastrophic earthquake of 12 January 2010 and served until September 2012.

Mr. Patterson has addressed world leaders in just about every international and regional forum including the United Nations, Group of 15, Group of 77, Non-Aligned Movement, Summit of the Americas, Commonwealth of Nations and CARICOM. He has delivered numerous lectures on issues of international trade and negotiation, the development agenda for developing nations and regionalization at universities in the Latin American and Caribbean Region and the United States of America.

PJ Patterson has been a Member of the Global Leadership Foundation since 2006.