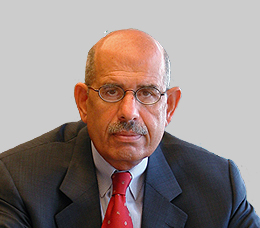 Mohamed ElBaradei is an Egyptian law scholar and diplomat who served as Director General of the International Atomic Energy Agency from 1997 to 2009 and as interim Vice President of Egypt in 2013.

In 2005, Mohamed ElBaradei and the IAEA were jointly awarded the Nobel Peace Prize for their efforts to prevent nuclear energy from being used for military purposes and to ensure that nuclear energy, for peaceful purposes, is used in the safest possible way.

Mohamed ElBaradei gained a Bachelor’s degree in Law in 1962 at the University of Cairo, and a Doctorate in International Law at New York University School of Law in 1974.

1974 to 1978 Dr ElBaradei was a special assistant and legal advisor to the Foreign Minister of Egypt. In 1980, he left the Egyptian Diplomatic Service to join the United Nations where, from 1980 to 1984, he was a senior fellow responsible for the International Law Program at the United Nations Institute for Training and Research. 1981 to 1987, he was also an Adjunct Professor of International Law at the New York University School of Law.

ElBaradei has lectured widely in the fields of international law, international organizations, global equity and security, arms control, democratic transition and human rights and is the author of various books and articles on these subjects. He is an adjunct professor of Law at Cairo University School of Law and in 2014 was Laureate in Residence at Fletcher School for Law and Diplomacy.

Dr ElBaradei has been a board member of many organizations including the Global Citizenship Commission; Transparency International; The International Crisis Group; the Coalition of Dialogue on Africa; the Global Economic Symposium; the American University in Cairo; United Nations High Level Commission on HIV Prevention; Cairo Regional Center for International Commercial Arbitration (CRCICA) and International Luxemburg Forum on Preventing Nuclear Catastrophe.

Dr ElBaradei is an advocate for peace, freedom and democracy in the Arab World. Following the Arab Spring of 2011 he launched the Constitution Party in April 2012. Later that year his party joined secular parties to form the National Salvation Front, a coalition opposed to President Mohamed Morsi’s decrees. Following the mass country wide protests which led to the removal of the President, Dr ElBaradei was asked to assume the responsibility of Interim Vice President of Egypt in 2013. However, he resigned this post shortly after his appointment in protest over the use of violence against the supporters of the deposed president.

He has received numerous other awards for his work as a public servant and as an advocate of tolerance, humanity and freedom.

Mohamed ElBaradei became a Member of the Global Leadership Foundation in 2015.