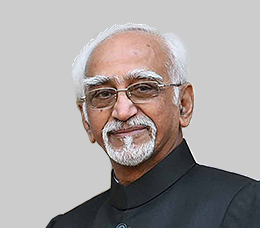 Mohammad Hamid Ansari was born in Calcutta, India, in 1937 and was educated at the University of Calcutta and the Aligarh Muslim University.

Over the next few years Hamid Ansari worked in Academia. In December 1999 he became a Visiting Professor at the Centre for West Asian and African Studies in Jawaharlal Nehru University, New Delhi. From May 2000 to 2002 he served as Vice Chancellor of the Aligarh Muslim University. He was thereafter a Distinguished Fellow with the Observer Research Foundation from 2002-2006. From 2003-2005 he served as Visiting Professor at the Academy for Third World Studies at the Jamia Millia Islamia University, New Delhi.

From 2004-2006, he was Co-Chairman of the India-UK Round Table, a body established during the ministerial tenure of fellow GLF Member, Jaswant Singh and his British counterpart, Robin Cook. During the same period, Ansari was also a Member of the National Security Advisory Board. In 2006-2007 he was Chairman of the Fifth Statutory National Commission for Minorities.

In August 2007, Mohammad Hamid Ansari was elected as the thirteenth Vice President of India, a post to which he was re-elected in 2012 for a second five-year term until August 2017. Throughout this period, he was also ex-officio Chairman of the Rajya Sabha (Upper House of Parliament).

He was awarded the national award of Padma Shri in 1984.