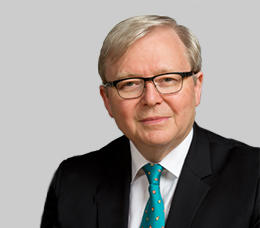 During his first term as Prime Minister Kevin Rudd led Australia’s response to the global financial crisis adopting a stimulus strategy that ensured that Australia did not go into recession. Mr Rudd was a co-founder of the G20, established to drive the global response to the crisis, which, through its actions in 2009, prevented the global economy from spiralling into depression.

Kevin Rudd joined the Department of Foreign Affairs in 1981, serving as a diplomat at various Australian embassies, including in Stockholm and in Beijing, until 1988. Returning to Australia he served as Chief of Staff to the Opposition Leader in Queensland from 1988-92 and Director-General of the Office of Cabinet from 1992-95. In 1998, he was elected to the House of Representatives for Griffith and, in 2001, was promoted to Shadow Minister for Foreign Affairs.

In 2006 Kevin Rudd became leader of the Labor Party, which went on to win the 2007 elections by a landslide.

As Prime Minister and Foreign Minister, Mr. Rudd was active in global and regional foreign policy leadership. He was a driving force in expanding the East Asia Summit to include both the U.S. and Russia in 2010, and initiated the concept of transforming the EAS into a wider Asia Pacific Community. On climate change, Mr. Rudd ratified the Kyoto Protocol in 2007 and legislated in 2008 for a 20 percent mandatory renewable energy target for Australia. He represented Australia at the 2009 Copenhagen Climate Change Summit which produced the Copenhagen Accord, for the first time committing states to not allow temperature increases beyond two degrees. He was appointed a member of the UN Secretary-General’s High Level Panel on Global Sustainability and is a co-author of the report Resilient People, Resilient Planet for the 2012 Rio+20 Conference.

Mr. Rudd drove Australia’s successful bid for its non-permanent seat on the United Nations Security Council for 2012-2014. His government also saw the near doubling of Australia’s foreign aid budget to approximately $5 billion, making Australia then one of the top ten aid donors in the world. He also appointed Australia’s first ever Ambassador for Women and Girls to support the critical role of women in development and reduce physical and sexual violence against women.

Domestically, Mr. Rudd delivered Australia’s formal national apology to indigenous Australians. In education, his government introduced Australia’s first-ever nationwide school curriculum, undertook the biggest-ever capital investment program in Australian schools with the building of thousands of new state of the art libraries across the country, as well as introducing the first-ever mandatory national assessment system of literacy and numeracy standards. In health, Mr. Rudd in 2010 negotiated with the Australian states a National Health and Hospitals Reform Agreement, the biggest reform and investment in the health system since the introduction of Medicare 30 years before. His government established a national network of leading-edge cancer care centers across Australia, before introducing the world’s first ever plain-packaging regime for all tobacco products. To improve the rate of organ and tissue donation, he established Australia’s first National Organ and Tissue Transplant Authority. In 2010, Mr. Rudd’s government introduced Australia’s first-ever paid parental leave scheme and implemented the biggest increase in, and reform of, the pension age since federation. He also founded the National Broadband Network to deliver high-speed broadband for every household, business, school, hospital, and GP in the country.

Mr. Rudd joined the Asia Society Policy Institute as its inaugural President in January 2015. ASPI is a “think-do tank” dedicated to using second-track diplomacy to assist governments and businesses in resolving policy challenges within Asia, and between Asia and the West.

He is also Chair of the Independent Commission on Multilateralism, where he is leading a review of the UN system over the 2015-16 period.

In 2014, Mr. Rudd was a Senior Fellow at the Harvard Kennedy School, where he completed a major policy paper U.S.-China 21: The Future of U.S.-China Relations Under Xi Jinping. He is a Distinguished Fellow at Chatham House in London, a Distinguished Statesman with the Center for Strategic and International Studies in Washington, and a Distinguished Fellow at the Paulson Institute in Chicago. Mr. Rudd is a member of the Comprehensive Nuclear-Test-Ban Treaty Organization’s Group of Eminent Persons. He is proficient in Mandarin Chinese and serves as a Visiting Professor at Tsinghua University in Beijing, and he co-chairs the World Economic Forum’s China Council.

Kevin Rudd became a Member of the Global Leadership Foundation in 2016.