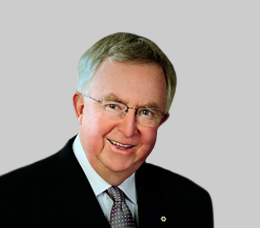 “GLF essential attributes are experience, authority and disinterested judgement which – taken together – can be the catalyst which helps governments break out of apparent dead ends”.

He served twice as Leader of Her Majesty’s Loyal Opposition, and as National Leader of the Progressive Conservative Party of Canada. The Right Honourable Joe Clark was elected eight times to the House of Commons of Canada, retiring in June 2004.

Mr. Clark served as Special Representative of the Secretary-General of the United Nations for Cyprus from 1993-96. He belongs to a number of public policy organisations and international NGOs and has led or co-led Election Observation teams in Mexico, the Dominican Republic, Cameroon, Democratic Republic of Congo, Nigeria, Lebanon and Pakistan.

He has been a visiting scholar at the University of California, Berkeley and American University in Washington, DC, a Public Policy Scholar at the Woodrow Wilson International Center for Scholars and is author of two books on Canada –  “Canada: A Nation Too Good To Lose” and “How We Lead: Canada in a Century of Change”.

Mr. Clark is a Companion of the Order of Canada, a member of the Alberta Order of Excellence, and l’Ordre de la Pleiades, and has been awarded several honorary degrees. He was the first recipient of the Vimy Award (which is presented to the Canadian citizen who has made an outstanding contribution to the security of Canada and the preservation of its democratic values).

Mr. Clark is President of Joe Clark and Associates, an international consulting firm based in Canada.

Joe Clark has been a Member of the Global Leadership Foundation since 2010 and served as the Foundation’s Vice Chair from 2010 to 2019.  He continues to serve as a Member of the Board of GLF and has been involved in a number of projects in Africa and the Americas.