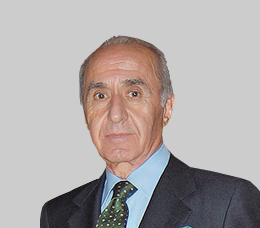 He also served as the Speaker of the Turkish Grand National Assembly from 1997-99 and on retiring from high office in Turkey was appointed NATO Senior Civilian Representative in Afghanistan from 2003-06.

After completing his education at Ankara University, Hikmet Çetin joined the State Planning Organization before moving to the US to study further at Williams College, Massachusetts and Stanford University, California. On returning to Turkey, Hikmet Çetin completed his military service in 1970 and continued his career at the State Planning organisation, serving as Head of the Economic Planning Department until 1977 when he entered politics.

Having stood in the 1977 General Elections as the candidate of the Republican People’s Party – a Kemalist, social-liberal and social democratic political party – Hikmet Çetin served as Minister of State and later as Deputy Prime Minister in the cabinet of the Prime Minister Bülent Ecevit. Following the 1980 military coup – which abolished the Parliament and the government, suspended the Constitution, and banned all political parties and trade unions – Hikmet Çetin became an advisor in planning to the Government of Yemen.

In 1991 he was re-elected to Parliament and served as the Minister of Foreign Affairs in the two coalition Governments between 1991 and 1994.

When the Social Democratic Populist Party merged with the reformed Republican People’s Party in 1995, Hikmet Çetin was elected Chairman by the Joint Convention of both Parties. Later that year, however, at the party’s national convention, he declined to run for the position of Chairman and resigned.

Hikmet Çetin regaining his Parliamentary seat in the 1995 General Elections and was again appointed Minister of State and Deputy Prime Minister. In 1997 he was elected Speaker of the Turkish Grand National Assembly – a position he held until 1999.

In November 2003, Hikmet Çetin was appointed the NATO Secretary General’s Senior Civilian Representative in Afghanistan, the highest political representative of NATO in his country. On January 26, 2004, he took office in Kabul, and served two consecutive terms until August 24, 2006.

Hikmet Çetin has been a Member of the Global Leadership Foundation since 2013.