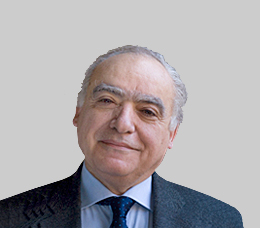 After studying law and political science in Paris, Ghassan Salamé taught international relations at the American University of Beirut and Saint Joseph University in Beirut and, later, at the University of Paris.

Having served as an advisory to the Lebanese government and parliament in the 1980’s and 1990’s, Ghassan Salamé was appointed Lebanon’s Minister of Culture in 2000, in charge of national heritage and the arts. Between 2000-03 he served on several inter-ministerial committees, notably on the reform of the Higher Education system, jobs for university graduates, productivity in the public administration and e-government. During this time he was appointed Chairman of the Committee and Spokesman for the Arab Summit (March 2002) and for the Francophone Summit (October 2002) in Beirut.

Ghassan Salamé was Political Advisor to the UN Mission in Iraq (2003) and Senior Advisor to the United Nations Secretary-General (2003-2005 and again since August 2012).

Dr Salamé has served as the Vice-Chairman of the Board of the International Crisis Group (Brussels) and sat on the board of the Open Society Institute (New York), the Council of the International Institute for Strategic Studies and a few other not-for-profit organisations. He is the founding chairman of the Arab Fund for Arts and Culture (Beirut).

Through his many scholarly pursuits, Ghassan Salamé is recognized as one of the most respected actors and observers of conflict resolution and Middle East politics and as a widely read expert on international relations. He has written a number of books on the state and society in the Arab Levant, and edits (inter alia) Democracy Without Democrats: Politics of Liberalization in the Arab and Muslim World; The Politics of Arab Integration and The Foundations of the Arab State.

His essays have been published in Foreign Policy, Revue française de science politique, European Journal of International Affairs, The Middle East Journal and other scholarly journals.

Ghassan Salamé has a PhD in Literature and a PhD in Politics at Paris I University, a master’s degree in Lebanese and French law, and a number of qualifications in the arts.

Ghassan Salamé has been a Member of the Global Leadership Foundation since 2013.

After two years as the UN Envoy to Libya, in 2020, Ghassan Salamé recently stepped down from the role.