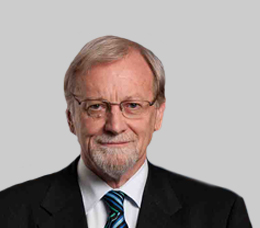 Gareth Evans was one of Australia’s longest serving Foreign Ministers, best known internationally for his roles in developing the UN peace plan for Cambodia, bringing to a conclusion the international Chemical Weapons Convention, founding the Asia Pacific Economic Cooperation (APEC) forum and ASEAN Regional Forum (ARF), and initiating the Canberra Commission on the Elimination of Nuclear Weapons.

Before entering the Australian Parliament in 1978, Gareth Evans was an academic lawyer specialising in constitutional and civil liberties law and a barrister specialising in industrial law. He became a Queens Counsel (QC) in 1983.

From January 2000 to June 2009 Gareth Evans was President and Chief Executive Officer of the Brussels-based International Crisis Group, an independent global conflict prevention and resolution organisation.

In 2000-2001 he was co-chair, with Mohamed Sahnoun, of the International Commission on Intervention and State Sovereignty (ICISS), appointed by the Government of Canada, which published its report, The Responsibility to Protect, in December 2001.

Gareth Evans was a member of the of the UN Secretary General’s High Level Panel on Threats, Challenges and Change, whose report “A More Secure World: Our Shared Responsibility” was published in December 2004; the Commission on Weapons of Mass Destruction sponsored by Sweden and chaired by Hans Blix which reported in June 2006; the International Task Force on Global Public Goods, sponsored by Sweden and France and chaired by Ernesto Zedillo, which reported in September 2006; and the Commission of Eminent Persons on The Role of the IAEA to 2020 and Beyond, whose report “Reinforcing the Global Nuclear Order for Peace and Prosperity” was launched in June 2008. He had previously served as a member of the Carnegie Commission on Preventing Deadly Conflict, co-chaired by Cyrus Vance and David Hamburg (1994-97).

Gareth Evans has numerous awards and distinctions including the 2010 Franklin and Eleanor Roosevelt Institute/Roosevelt Stichting Four Freedoms Award for Freedom from Fear, citing his pioneering work on the Responsibility to Protect Concept and his contributions to conflict prevention and resolution, arms control and disarmament. He was Australian Humanist of the Year in 1990, won the ANZAC Peace Prize in 1994 for his work on Cambodia, and made an Officer of the Order of Australia (AO) in 2001. His international awards include the Chilean Order of Merit (Grand Cross), given in 1999 primarily for his work in initiating APEC and the 1995 Grawemeyer Prize for Ideas Improving World Order for his Foreign Policy article “Cooperative Security and Intrastate Conflict”.

Gareth Evans has maintained strong academic and scholarly connections throughout his career, lecturing at many universities around the world. He has written or edited nine books and has also published over 100 chapters in books and journal articles (and many more newspaper and magazine articles) on foreign relations, politics, human rights and legal reform.

Until 2020, Professor the Hon Gareth Evans AO QC was Chancellor of the Australian National University. He remains an Honorary Professorial Fellow at The University of Melbourne, Co-chair of the International Advisory Board of the Global Centre for the Responsibility to Protect, and Convenor of the Asia Pacific Leadership Network for Nuclear Non-Proliferation and Disarmament.

Gareth Evans has been a Member of the Global Leadership Foundation since 2010. He has been involved in a GLF project in Asia.