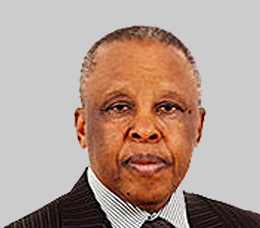 President Festus G. Mogae led the Republic of Botswana from 1998 to 2008. Under his leadership, Botswana experienced the steady economic growth that has characterized its post-independence history.

Having trained as an economist at the Universities of Oxford and Sussex, in 1968 Festus Mogae took up a post at the Ministry of Finance and Development Planning, progressing to become Director of Economic Affairs.

In 1992 he became Vice President of Botswana before becoming President in 1998. In 1999, when his party, the Botswana Democratic Party (BDP), retained power in the October general election, Mogae was sworn in for what would be the first of two 5-year terms in office during which time he sought to tackle poverty, unemployment, as well as the spread of HIV-AIDS.

On 5 August 2008 Mogae launched the Champions for an HIV-free Generation, a group of renowned African leaders calling for their peers to rethink and step up efforts to prevent the spread of HIV.

Alongside Presidents Chissano and Mbeki, he led the mediation on the dispute over the boundary along Lake Malawi between Malawi and Tanzania.

On 28 February 2015 he led the Commonwealth observers for the Lesotho elections.

In November 2015 he began his duties as South Sudan’s Chairperson of the Joint Monitoring and Evaluation Commission.

Mogae is a former Wilson Center Public Policy Scholar and has chaired the Council of Elders. He currently serves as Special Envoy of the United Nations Secretary-General on Climate Change and is on the advisory board of US nonprofit TeachAIDS.