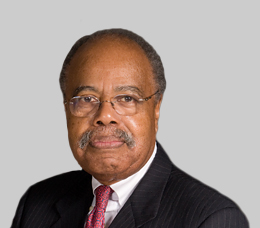 Donald F. McHenry served as Ambassador and U.S. Permanent Representative to the United Nations from September 1979 until January 20, 1981.

Ambassador McHenry has studied, taught and worked primarily in the fields of foreign policy and international law and organizations. He joined the U.S. Department of State in 1963 and served eight years in various positions related to U.S. foreign policy. In 1966 Ambassador McHenry received the Department’s Superior Honor Award. In 1971, while on leave from the Department, he was a Guest Scholar at the Brookings Institution, Washington, D.C. and an International Affairs Fellow of the Council on Foreign Relations, New York. In 1973, after leaving the State Department, he joined the Carnegie Endowment for International Peace in Washington, D.C. as a project director in Humanitarian Policy Studies. In 1976, Ambassador McHenry served as a member of President Carter’s transition staff at the State Department before joining the U.S. Mission to the UN.

During his career, Ambassador McHenry represented the United States in a number of international fora and as the U.S. negotiator on the question on Namibia. He served as Presidential Envoy to Nigeria; a member of UN Secretary-General Kofi Annan’s eminent persons mission to Algeria; and, leader of a consulting mission on Senegal elections.

Ambassador McHenry is a former member of the Board of Governors of the American Stock Exchange and has served as a director of the Coca Cola Company, Columbia Pictures, Fleet Boston Financial, GlaxoSmithKline, AT&T and International Paper.  He has also served on the Board of the Council of Foreign Relations, the Peterson Institute of International Economics, the Ford Foundation, the Johnson Foundation, the National Institute for Dispute Resolution, Mayo Foundation, Mount Holyoke College and the World Peace Foundation.

Ambassador McHenry has taught at Southern Illinois, Howard, American and Georgetown Universities. He is the author of Micronesia: Trust Betrayed (Carnegie Endowment, 1975) and numerous other articles published in professional journals and newspapers.

Ambassador McHenry is a Distinguished Professor of the Practice of Diplomacy Emeritus at Georgetown University.

Don McHenry has been a Member of the Global Leadership Foundation since 2006.   He has been involved in a GLF project in North Africa.