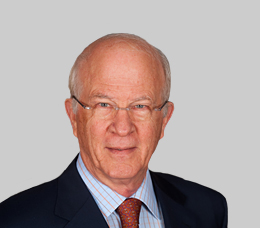 US Assistant Secretary for African Affairs 1981-89

“GLF has established itself as a unique resource for leaders that are facing serious challenges and have the sagacity to recognise their need for external input from senior, experienced people”.

US Assistant Secretary for African Affairs 1981-89

As the U.S. Assistant Secretary of State for African Affairs between 1981 and 1989, Chester Crocker developed the strategy and led the diplomacy that produced the treaties signed by Angola, Cuba, and South Africa in New York in December 1988. These agreements resulted in Namibia’s independence (March 1990) and the withdrawal of foreign forces from Namibia and Angola.

Between 1992 and 2004, Chester Crocker was Chairman of the United States Institute of Peace, an independent, nonpartisan institution created and funded by Congress to strengthen knowledge and practice in international conflict. (He continued to serve as a Member of its Board until 2012).

Chester Crocker also serves on the Board of G3 Ltd., a business intelligence advisory firm. He consults as advisor on strategy and negotiation to a number of U.S. and European firms and is a distinguished fellow at the Centre for International Governance Innovation (CIGI), an independent, non-partisan think tank that partners with the three universities in Waterloo, Ontario.

Having first joined Georgetown University as Director of its Master of Science in Foreign Service program and Associate Professor of International Relations (1972-80), and serving as Director of African studies at the Center for Strategic and International Studies (1976-80), Chester is the James R. Schlesinger professor of strategic studies at Georgetown’s School of Foreign Service where he lectures and writes on international politics, U.S. foreign policy, conflict management and security issues, the practice of mediation, and African affairs.

He has appeared on numerous television shows, as a dinner or keynote speaker at conferences in the U.S., Europe and Africa, and as a witness in Congressional hearings.

Chester Crocker has written and co-edited a number of books, including: