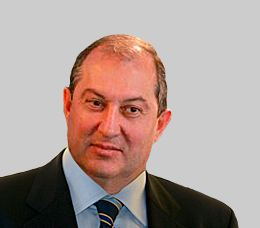 Dr. Sarkissian has served as Special Advisor to the President of the European Bank for Reconstruction and Development, and as a Governor of the EBRD from 1999-2000.

In 2000 Dr. Sarkissian established the Eurasia Research Programme at the Judge Business School, University of Cambridge. Under his directorship, the Programme has implemented a series of very successful projects in both England and the Eurasia region. He is founding President of Eurasia House International in London, which fosters critical dialogue and cooperation among political and business leaders and is involved in bridge building between the West and the vast geographic space extending from Eastern Europe to Russia, the CIS and to China.
Dr. Sarkissian has been Senior Executive Advisor to the Board of Directors and Chairmen of a host of global companies, including BP, Alcatel, Telefonica, Finmeccanica and Bank of America Merrill Lynch.

His business activities in the computer software industry include authorship of game software. He is one of the original authors of TETRIS, one of the world’s most popular computer games. He has authored numerous academic articles and three books on theoretical physics, astrophysics, computer modelling, political science and transition economics. He is a frequent speaker at high-level international conferences, seminars, and gatherings on issues such as leadership, political economy, energy security, geopolitics and developments in Eurasia.

Armen Sarkissian joined GLF in 2006 but stepped down from active Membership when he took up the post of Armenian Ambassador in London.