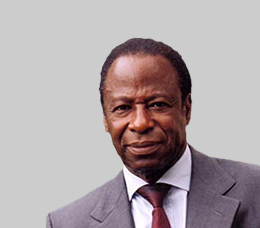 Amara Essy is a distinguished diplomat from Côte d’Ivoire who served his country as Foreign Minister from 1990 to 2000. He was also the Secretary General of the Organisation of African Unity in 2001 and Chairman of the Commission of the African Union from 2002 to 2003.

Amara Essy was the Foreign Minister of Côte d’Ivoire at the time of the military coup of December 1999 and was briefly detained before being replaced in the transitional government named on 4 January 2000.   He was then appointed the UN Special Envoy to the Central African Republic, the Republic of Congo, Gabon and Angola before being elected in 2001 to the post of Secretary General of the Organisation of African Unity (OAU), with the task of leading the OAU’s transformation into the African Union over the course of one year. He then served as interim Chairman of the Commission of the African Union in 2002-03, before withdrawing his candidacy for the permanent post in favour of Alpha Oumar Konaré, the former President of Mali.

Before becoming Foreign Minister of Côte d’Ivoire Amara Essy served as his country’s Permanent Representative to the United Nations. In this capacity he served as Vice-President of the forty-third session of the General Assembly from September 1988 to September 1989 and as President of the Security Council in January 1990. He was also Chairman of the “Group of 77” of developing nations in Geneva from January 1977 to January 1978.   Mr. Essy participated in many sessions of the General Assembly as well as several sectoral conferences, including the United Nations Conference on the Law of the Sea (Nairobi, Caracas, Geneva, New York, Kingston, Montego Bay), United Nations Conference on Trade and Development (UNCTAD) IV and UNCTAD V in Nairobi and Manila respectively, the Conference of the International Year of Women in Mexico, the Conference on Codification of International Law in Vienna and many sessions, the Commission on Human Rights as well as those of the Economic and Social Council and the United Nations Development Programme (UNDP).   He has also participated in many international conferences held by the Organization of African Unity (OAU), the Economic Community of West African States (ECOWAS) and the Non-Aligned Movement.

He had become the Chief of the Division of Economic Relations at the Central Department of the foreign ministry of Côte d’Ivoire in 1970.

Mr. Essy has extensive background in conflict resolution, including conflict negotiations in Angola, Burkina Faso, Chad, Liberia, Sierra Leone and Somalia, notably negotiations in Lome, Togo between Sierra Leone rebels and the Freetown government, which led to a UN-brokered peace agreement in 1999. He also served as the personal emissary of the late Côte d’Ivoire President Houphouet Boigny to Palestinian Authority President Yasser Arafat, as well as in negotiations with South African authorities on the questions of Namibian independence and the elimination of apartheid in South Africa.

In 2009 Amara Essy was appointed the AU’s envoy to Madagascar, to assess that country’s political crisis, and in 2012 he chaired the UN High Level Panel for the Algerian legislative elections.

Amara Essy is very involved with a number of institutions in the fields of education, training and development and is currently Honorary Professor of the New England Centre for International Studies at the University of Bridgeport, Connecticut.

Mr. Essy holds a degree in public law and a diploma of high-level studies, also in public law. He also holds a diploma from the Carnegie Endowment for International Peace, Switzerland.

Amara Essy became a Member of the Global Leadership Foundation in 2014.