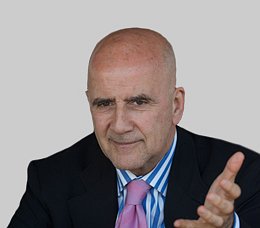 Alvaro de Soto is a Peruvian diplomat and renowned international mediator. He led the negotiations which brought an end to the war in El Salvador; he has also served as political advisor to Boutros Boutros-Ghali, Special Envoy for Myanmar, the Special Advisor on Cyprus, and the Special Coordinator for the Middle East Peace Process.

Mr de Soto was a member of the Peruvian delegation (1968-1982) to the third UN Conference on the Law of the Sea from its earliest preparatory stages, and was the coordinator of the Group of 77 in negotiations on the deep seabed and overall Chairman of the Group at the final session of the Conference at which the Convention was adopted.

Upon joining the UN Secretary-General’s Office in 1982 he joined Mr Perez de Cuellar in his attempt to defuse the South Atlantic crisis over the Falklands/Malvinas islands.  He also mediated, as Mr. Perez de Cuellar’s personal representative for the Central American peace process, the 1991-1992 negotiations leading to the peace accords which brought to an end the decade-long war in El Salvador. This broke new ground for the UN as the Cold War drew to an end.

Alvaro de Soto participated in Mr. Boutros Ghali’s efforts concerning the former Yugoslavia, Haiti and Somalia in 1992-1994 and, from 1995 to 1999, when he was Assistant Secretary-General for Political Affairs, he was first Mr. Boutros Ghali’s, then Mr. Kofi Annan’s Special Envoy for Myanmar, and represented Mr. Boutros Ghali in consultations between Indonesia and Portugal concerning East Timor. Mr Annan then appointed him to lead the 1999-2004 negotiations on Cyprus that resulted in referendums on a reunification plan mainly drafted by the UN which could have led to a unified Cyprus joining the EU had the Greek Cypriots joined the Turkish Cypriots in approving it in separate, simultaneous referendums in April 2004.

From 2003 to 2005 Alvaro de Soto was Mr. Annan’s Special Representative for Western Sahara, and his final assignment, from 2005 to 2007, was as UN Special Coordinator for the Middle East Peace Process and Envoy to the Middle East Quartet as well as Personal Envoy of the Secretary-General to the PLO and the Palestinian Authority.

Mr. de Soto has written and published a number of articles and book chapters. He has lectured widely in the U.S., Europe, Latin America, Asia and the Middle East. He teaches conflict resolution at the Paris School of International Affairs, part of Sciences Po.  He is a Senior Fellow at the Ralph Bunche Institute. He hosts “Conversations with Alvaro de Soto,” a series of public interviews with senior mediators and negotiators at Columbia University.

Alvaro de Soto joined GLF in 2008. He has been involved in a GLF project in Central America.